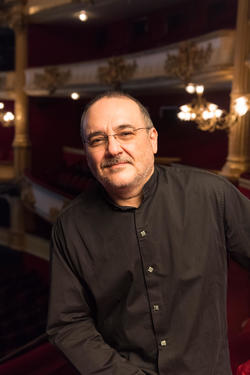 ----Giulio Cesare will be the first Baroque opera to be staged on the main stage of the New National Theatre, Tokyo. In Europe, productions of Baroque operas are very popular. What do you think is their appeal?

A: Baroque opera is indeed popular in Europe, but it's not just opera but the music of the seventeenth and eighteenth centuries in general. The rise in interest for the music of this period began about forty years ago, and it has now become an important repertoire in concerts and opera. Of course Bach, Handel and Vivaldi are well known in the classical music world, but a lot of work has been done to promote lesser-known composers too. There are many great composers such as Monteverdi, Cavalli, Lully and Rameau whose wonderful and attractive works enrich our musical experiences.

----Would you say that Handel is particularly popular amongst Baroque opera composers?

A: Handel was an international opera composer in his time. He was an artist familiar with multiple cultures and he knew the tastes of his public very well, so he was able to combine the commercial requirements and the musical content of opera. He was not only a hugely productive composer who always attracted attention, but he knew his market well and how to build a career for himself.

----But it was the Italian composers who dominated the operatic world in his time, wasn't it?

A: That's right. Italian composers such as Porpora, Bononcini, and Vivaldi, who travelled around the European capitals, were particularly well known at the time. Most Italian composers at the time worked in the operatic field. They were active all around Europe; for example, Galuppi was invited to Russia. Meanwhile, Handel gained popularity from the London public. Born in Germany, he started his career in Hamburg, and after spending some years in Italy, he moved to London. Eventually he settled in Britain where he achieved great success.

----Giulio Cesare is the best known of Handel's operas. Is this because the two main characters, Julius Caesar and Cleopatra, are famous historical figures?

A: One of the reasons for its popularity is that it was the earliest work to be revived of Handel's operas. It was already being staged in the 1950s, and it has continued to be a favourite until this day. Many great stars such as Montserrat Caballé and Joan Sutherland have sung the work. There are some vocally challenging arias and many spectacular scenes in this opera. The music is brilliant and has strong character, which is another reason why it is popular.

----Often period-instrument orchestras are used in Baroque opera productions, but on this occasion the Tokyo Philharmonic Orchestra will perform in the pit.

A: Yes, the orchestra will perform on modern instruments. In large opera houses this is often the case - it was the same style when I conducted Giulio Cesare at the Teatro Comunale in Bologna and the Teatro Real in Madrid. In addition, we will have a continuo group on Baroque instruments.

----When working with a modern orchestra, what is the most important thing you try to convey regarding Baroque style performance?

A: There are many things I need to convey, such as how to use the bow, Baroque style phrasing and ornamentation. In Baroque music and in the music of the Romantic era, the concept of phrasing itself is different. But generally, I try to emphasize the musical content rather than stylistic issues. The orchestra is a group of professionals, and our work at the opera house is not about studying style. It's important to convey the necessary information quickly and efficiently.
----You are involved in a diverse range of activities, as conductor, harpsichordist, organist, and also in the education of young artists. You have received many accolades for your recordings with Concerto Italiano, your own early music ensemble. Where does your passion for music come from, and how do you maintain it?

A: As I have been in this industry for forty years or so, I have forgotten where my passion for music originated... As for maintaining my passion, over the years I've been able to discover some fundamental principles in Baroque music - for example, the differences between the seventeenth and eighteenth centuries, and the differences in the music of Italy, France and Germany. After forty years of pursuing this music, I feel I am at the stage where I have accumulated enough experience, and I should now consolidate all the knowledge and information I have acquired.

----You also maintain your interests as a musicologist.

A: To perform this sort of music, one needs to be familiar with certain essential features. For musicians in this field, musicological knowledge is a requirement. We need to know as accurately as possible about how music was performed in the seventeenth and eighteenth centuries. I am particularly interested in analyzing the compositional methods of each composer - why did he choose this particular method? I want to be as faithful as possible to the composer's intentions.

----In addition to your expertise on Baroque style performance, you are also highly regarded for the musical expressivity of your performances. I've read in interviews that you are also a good cook. Would you say that creativity and fantasy are essential in both music and cooking?

A: It's true, I'm good at cooking. As you say, music and cooking have many things in common. We put many ingredients together which creates the chemistry. There is also a joy in creating something for other people - to cook for someone, to perform for someone. Both are important tools of communication.

--Do you have a message for the Japanese audience?

A: Please come and see Giulio Cesare. Even if you've never seen a Baroque opera, I'm sure you will have a great experience. Be courageous and come to the theatre! 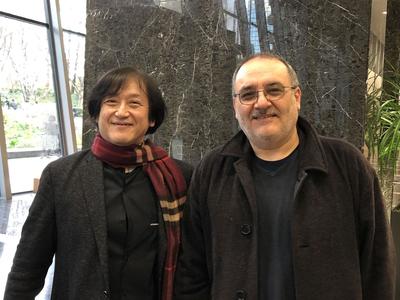