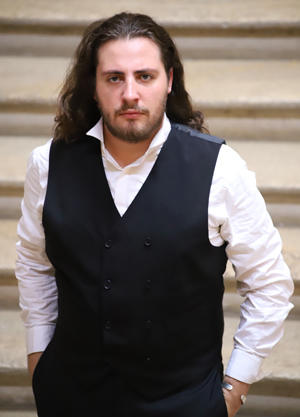 --Congratulations on your role debut as Hamlet in a concert performance of Ambroise Thomas's opera. You are well known for your portrayal of Figaro in Il barbiere di Siviglia, but recently you have been extending your repertoire.

Yes, I've added some lighter roles in Donizetti and French opera. I took on the role of Hamlet because the opera is somewhere in between bel canto and Romantic opera, and it suits my current vocal range perfectly. Also, a concert performance is easier as one doesn't have to worry about the acting. It was exciting to sing with Diana Damrau - she has been my idol since my student days.

In terms of vocal technique, Figaro and Hamlet are actually similar, for instance the long phrases and repeats in the finales. So the experience as Figaro helped me in singing Hamlet.

--What appeals to you most about the role of Figaro in Il barbiere?

It's my most favorite role in the world! I feel the role is very close to me both in terms of character and vocally. It's not easy by any means, but to me it's a natural and perfect role.

On the other hand, Mozart's music is based more on emotions, so one has delve inside the music. In Mozart's operas, every note contains the emotions written in the libretto. To express these emotions with correct technique is also really difficult. The notes on the page are simple but so difficult to sing properly. I probably won't be able to understand his music fully even at the end of my life. Still, every time I sing his music, I discover something new. I've sung Papageno in Die Zauberflöte fifteen times, but every time I find something new. Mozart's music always feels fresh and lively.

--Mozart or Rossini - if you had to choose one, which would it be?

That's impossible! Both are like Gods to me. But perhaps my "heart" lies in Rossini. I'm French but my grandmother on my mother's side is Italian, so I have some Italian blood in me.

In my grandmother's house there was a piano, and on it stood a bust of Rossini. When I was a child, I asked her who this was, and she told me it was an Italian composer. So I said, please can you play his music, and she played for me music from Il barbiere di Siviglia and L'Italiana in Algeri. I understood straight away that Rossini was expressing "joy" in his music. For me, Rossini is Italy itself. He's like family to me. There are many Italian composers, but for me Rossini is the Italian composer. I am a foodie too, like Rossini!

--Who has been the most influential of your teachers?

I have only true teacher, Maryse Castets. She was a great soprano in the 1990s. As a high school student in a town called Libourne in France, I was also studying singing, and she came to hear my final exam there. Afterwards she said to me, "come immediately to my class at the Bordeaux national conservatory". I was taken by surprise and said "yes, maybe", but she said "not maybe, you must come!". So I did. The voice I have now was made by Madame Castets.

--You were destined to meet her.

I suppose so, though one could say that all careers are made in this way. Meeting right people at the right time, destiny, talent... But 80 percent is hard work.

--Listening to your Hamlet, I felt that one day, you will come to sing Verdi baritone roles like your fellow countryman Ludovic Tézier.

Hopefully such a time will come, maybe in about ten years. Tézier is a great friend and I know that he sang his first Verdi role when he was 41 or 42. It was Rigoletto, in a small theatre in Besançon which only seats a few hundred people. I think that is the right way. I want my Verdi debut to be Ford in Falstaff though. It's a brilliant role with a touch of bel canto, but not as heavy as Rigoletto. My dream is to eventually sing the title role in Nabucco. The music contains a great story and energy, and I think it's a perfect role.

Obviously I want to keep singing as long as possible, so I'm very cautious about extending my repertoire. When making a role debut, it's important to think about at what age, in which venue, and with whom. If you make your debut too early, the voice will become exhausted. I am currently discussing with my agent about making my role debut as Don Giovanni, but I want to start in a small theatre with singers of my own generation.

--Is there anything you do to maintain your voice?

No, not really. Music, singing, nature, eating...to value the pleasures of life, because everything is connected.

A person who stands on stage has to be filled with joy. The artist is the sun. Even if something unpleasant happens, you have to forget about it once you're on stage. It's the artist who gives, and the audience who receives. Unless the artist is fulfilled in life, he cannot give.