Interview with Evgenia MURAVEVA in the role of Tatyana

---When did you start to think about becoming a professional singer?

M: It happened when I was in high school. One day my classmate took me to an orthodox church and we tried to sing there with the choir. Back then, I didn't have any music education; it was my first experience in music. So I tried to understand music harmony by intuition. At that time, I came across some records of Caballe Montserrat and Zara Dolukhanova. I was so charmed by them, so I decided that I want to become an opera singer. When I was 19, I went to a music college to study the classical singing program. It was a start of my music education.

M: To graduate from the St. Petersburg Conservatory and to perform at the Mariinsky Theatre are the greatest opportunities given to me. At the same time, it's a huge responsibility that makes you work on yourself. High-quality cultural life of St. Petersburg is very important and helpful for the growing as an artist. Up to now, it's been greatly supporting and inspiring me.

---You covered the leading role, Katerina of the "Lady Macbeth of the Mtsensk District" at the Salzburg Festival in 2017. When were you asked to sing Katerina Lvovna? What kind of conversation did you have with maestro Mariss Jansons?

M: Before my arriving at Salzburg festival, I performed Katerina Lvovna once at the Mariinsky Theatre. Otherwise, I was invited for a festival to perform Aksinia and the prisoner. These are two small supporting roles. The main role as Katerina was assigned to one of my favorite singers - Nina Stemme. But suddenly Nina Stemme felt bad during the rehearsal shortly before the opening night. Then I was asked to see one music rehearsal in order to make a day off for Nina. After that rehearsal maestro Maris Jansons said quietly that we had a plan B about performing Katerina. Eventually, after the third performance, I was asked to perform Katerina, because of the serious health condition of Mrs. Stemme. That was the biggest day for my professional life. I was very worried because I didn't know all stage movements in this role, but at the same time I had full confidence about my wonderful role. Nevertheless, everyone was helping and supporting me. More of that, I felt comfortable working with Brandon Jovanovic on the stage. So, that was a great success and one of the happiest days in my life. Most of all I extremely grateful to maestro Maris Jansons for his help, he was like a guardian angel for me.

---Which performance was a turning point in your career?

---You have a very wide repertoire as Tosca, Madame Butterfly, Leonora, Gultrune, Katerina Lvovna, and Tatyana. How will you describe your own voice?

M: My voice really reacts to the character of my role and music colors. It's very important for creating an image on stage. Only my heart can tell me how to manage all this. 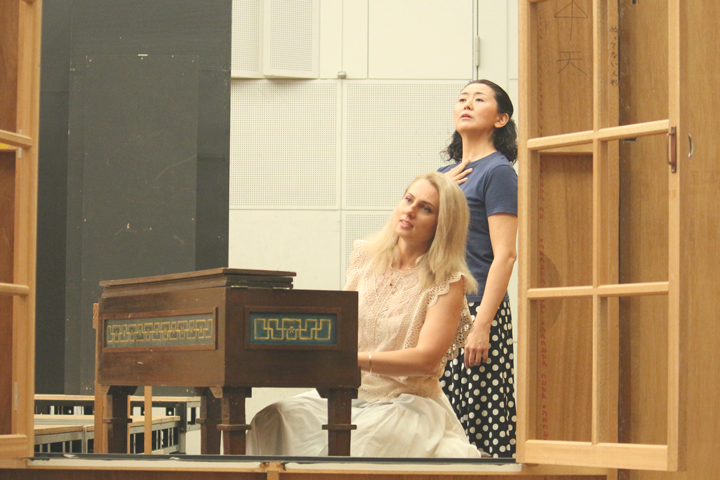 From the rehearsal of Eugene Onegin 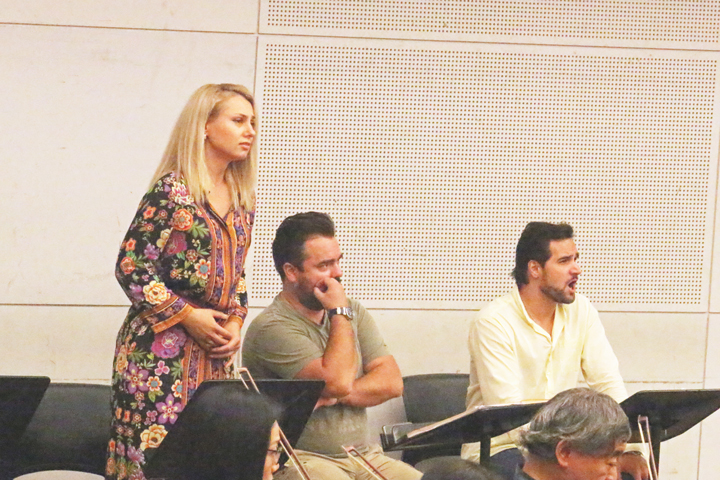 From the rehearsal of Eugene Onegin

"Eugene Onegin" is no doubt one of the greatest Russian Operas by Tchaikovsky. When was your role debut as Tatyana? What place does this opera take in your repertoire?

---Please tell us what you think about the character of Tatyana. When do you think was the happiest moment in her life?

M: Definitely Tatiana's happiest moment was when she fell in love and started to imagine the development of their relationships, all the dreams that she had when she was reading novels by Richardson and the same authors like him... The most romantic moment... I don't think that she has changed completely. It seems to me she remained the same but she accepted that cruel reality and put up with that.

---Tatyana stands all alone on the stage for the letter scene. This opera is also unique for this long solo scene. What is the most challenging thing in this scene?

M: I agree with you that it's such a unique scene full of various emotional colors and with such a diversity of thoughts: resolution, love, romance, doubts, confidence and even anger. The main challenge in this piece is to keep the audience's attention on you for the entire period because not every singer can actually do it. The audience can get bored at any moment. My interpretation is not the typical one. I try to show the real beauty of Tatyana's mind, richness of her spirit, tenderness of the heart, all the diversity of her emotions. Luckily I can feel that with my heart and it helps me to express it.

---Tatyana confessed her love to Onegin, but he didn't dare see the letter and beg her to be more decent. Was it an unladylike behavior in those days?

M: No, on the contrary, he said that he liked her sincerity, although in a polite manner he recommended her to be more careful about her being so free-hearted, because it might be dangerous for her and could break her heart easily. He is very honest in his speech. He didn't reply with a letter, because it was not his style. Onegin is very modern, but writing a letter is an old-fashioned way.

---What is the most challenging part of performing the role of Tatyana?

M: The most difficult part is the second scene of the the 3rd act. It is not easy to show her restraint toward Onegin and at the same time to play a character with deep love inside, to perform all contradictions inside the heart. BUT! Tatiana shows the full spectrum of Russian soul which makes this role so interesting.

---Thank you very much and we look forward to your Tatyana.

M: I hope we'll create one of the best embodiments of this great Tchaikovsky's masterpiece and it will be an event of international significance. I am also looking forward to singing in front of the Japanese audience.