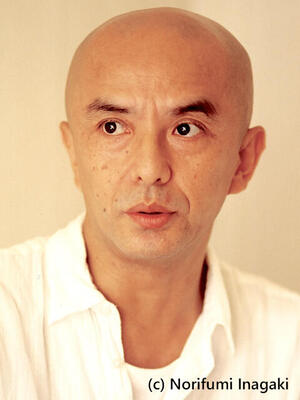 ■A Drama that develops in a Circle

Several choreographers have approached Orfeo ed Euridice in the past, but what I'm interested in is how I can interpret and express this fantastic opera in physical terms. In this opera, the two title roles and Amore, as well as the choir and orchestra, create a special world. In addition, the dancers including Rihoko Sato appear on stage. The set consists of an 8-metre circular platform created in the image of a flower arrangement plate. The singers and dancers perform on this platform, which is decorated with foliage and huge lilies.

The circle is a symbol of fate, nature, rules of law, and the universe. It has an absoluteness which is beyond the reach of human power, and regularity and motility that transcends human knowledge. Momentum and movement are consolidated, absorbed, or diffused into a circle. The circle can easily set off motions. On the other hand, humans cannot be restricted to a circular motion. The human body cannot adhere to absolute rules of law, and this produces various movements as well as discrepancies.

This opera is full of beautiful melodies, but beauty can cause uneasiness. It is not a simple love story. The important factors are the negative emotions such as uneasiness and doubt. Wherein does this darkness lie? Around us, within our body, or in our memory? Furthermore, where can we find this within the music? How can we present this on stage? By expressing different shades of darkness, we can create harmony and dissonance between the musical and the visual elements.

This "dissonance between the musical and the visual elements" is crucial for expression. Such clashes, contradictions and conflicts, or cynical relationships produce the powers of expression. One might sing a sad song in a brightly lit space, or one might sing of joy in near darkness.

What I often do when I create a work is to place two things (that are on different dimensions) on the same table (same dimension), and consider what the gap between them bring about. In other words, I place side by side something physical and non-physical, or something that can be read and cannot be read, and consider the internal contradiction and conflict in the external elements. Such juxtapositions of two heterogeneous things stimulate the heart and the story. What I want is to make everything "move" in dance, opera, or any creative stage work.

Human beings cannot stay still. They are always fluctuating subtly, and achieve stability through this fluctuation. Humans are more stable when they are walking at a certain pace; when you stand still, it's more difficult to keep a balance. I believe it an essence of human beings that we gain stability through instability in terms of physical motion, and as living beings. 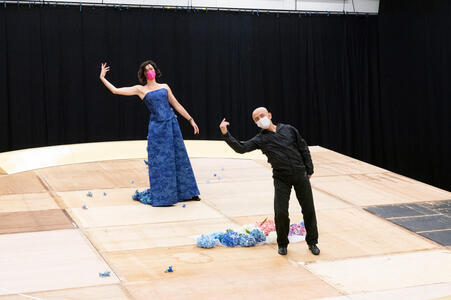 From the rehearsal of Orfeo ed Euridice

In the original Greek myth, Orfeo looks back and Euridice dies on the spot - that's the end of story. But in this opera, Amore, the god of love, revives Euridice because Orfeo tried to take his own life too and thereby "showed true love". The music in this scene becomes euphoric, and can even sound a bit ironic. How should I stage this joyful scene?

The interpretation of this last scene is crucial to the whole production yet very difficult to realize satisfactorily. In some stagings, Euridice doesn't come back to life and the opera ends as a tragedy. Certainly, this is more acceptable to us as a story. Then why revive her? My view is that whether she is dead or revived, it is the same. It is like a toss of a coin. Heads or tails, they are both sides of the same coin. In other words, life and death are both fate, and they exist equally. Perhaps we are just fussing over one or the other.

I have had experiences where someone came to assume a larger existence to me after death, even though the person was not so close to me during his/her lifetime. It's death that stirs such feelings towards that person. The word "spirit" may not be appropriate, but the dead person is moving and living inside us as a tangible existence. Perhaps this sensation is a reflection of our desires towards the person who can no longer be reached. In any case, as long as we have the feelings to be grateful and happy if God brings the person back to life, we might be willingly convinced of the resurrection even if it cannot be explained by reason.

Human desires are not always fulfilled. Nevertheless, imagine God says to us, "if you do THIS your desire won't be fulfilled": that probably means at least there is a small possibility of realizing it even though it may well result in unfulfillment. It is much better than to just be told to give it up as it won't be fulfilled from the outset. At least, you can be convinced of the existence of the desire itself through feeling frustration at the incomplete mission.

What makes this ending a sure thing is the "overabundance" of Baroque music. This even blows away the possibility of taking this ending in a negative way. Here I feel a sort of wild emotional explosion, a powerful manifestation of human desire, like a fervent prayer. I think this is a strong feature of this opera.

Another feature is that by giving it a happy ending, one is left with a feeling that something terrifying might happen subsequently. Had Orfeo died, he could have remained unhappy, but by becoming happy, something more terrifying could happen to him. Such an outcome of the drama allows us to imagine a post-opera narrative. 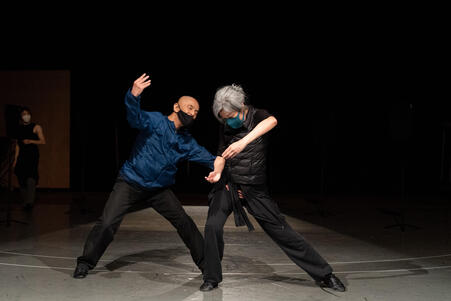 From the rehearsal of Orfeo ed Euridice

■Dance can be more Creative

What I find interesting about music is that although it is written out in the form of a score, it is not so stable and is fluctuating. Basically, musicians notate the score like text, and they read and understand its contents. We know that this demands high level of interpretation and expressive skills. I believe that when humans act to reproduce something, strict rules are necessary. Instrumental players have a strong and specific physicality for their instrument. The instrument exists as a medium in music, and it helps the performer to control his/her instable body precisely. In order that music could be produced according to the rules, the instable human body and the stable instrument came together, and as the next step the score was created. In other words, the Holy Trinity - the instrument, score, and the human body. But even though every performance is based on a score, there is always a gap between what is written and what is realized in each performance. Actually, I think this gap is a key element of the score, and this produces creativity. This is what I always find fascinating about music.

In dance, there are also types of dance notations, but it is very difficult to notate the movement of the human body as precisely as in a musical score. A score is there for the instrument, but the notation of the body becomes difficult when measured in numerical terms. I am deeply interested in the creation method and verbalization of the body. I believe that dance is close to poetry, and dance can achieve the same independent creativity that poetry and language have.

I like watching soccer, and my British friends often describe a fantastic play as "classic" or "class". This doesn't mean it's old-fashioned, but classic in the sense that it has a certain universality. Praising something that transcends time.

I think Europeans are very good at this. When they perform these traditional operas, even though they may give it a new staging, they still try to see the universal aspect in it. This enables them to understand the present.

In contemporary Japan, people tend to focus on specific periods but where is the universality in this? As a citizen of this world, we Japanese should reconsider the importance of "universality". We need to understand that the reason why Japanese traditional culture is respected in Europe or America is because it has a certain universality that is also valid in the modern age. Put differently, we need to question how a new expression can achieve universality.

Something visible and something that is not visible. I want to show something that fades away or something that gradually appears, or in musical terms, something that becomes gradually audible. Rather than just presenting it in an obvious way, I want the audience to recognize more clearly what they have sensed subconsciously. Such process of revelation is at the core of the expressions in my theatre works.

My aim is for "opera to become poetry": poetry itself, rather than something like poetry, or poetry-like something. I want to produce theatrical experiences in which both performers and the audience actively participate and impact each other, and make them feel alive. In this NNTT new production of Orfeo ed Euridice, with the exceptionally talented musicians and dancers taking part, I believe we can achieve this.

On Stage from 19 to 22 May.
See here for more information.