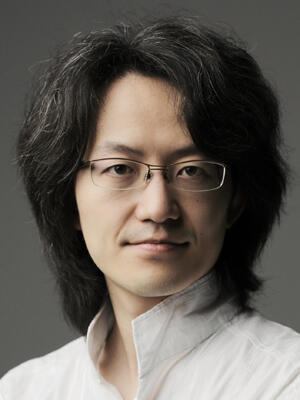 ―You are about to conduct Gluck's Orfeo ed Euridice at the New National Theatre, Tokyo (NNTT). Is this your house debut?

Yes, it's the first time for me to conduct a production in the main theatre. In 2009, I was the stage director in a "concert opera" series production of Monteverdi's L'incoronazione di Poppea in the Playhouse at NNTT which my father, Masaaki Suzuki, conducted, and I was directing the stage via an intercom headset while playing the harpsichord. Also, I've known the New National Theatre Chorus since they premiered my choral work some years ago.

―Orfeo ed Euridice is part of NNTT's Baroque Opera series. Originally, the series was supposed to start with Handel's Giulio Cesare in April 2020 but that has been postponed to next season due to the pandemic, so this Orfeo will now be the series opener.

That's right. It will be an important production in that sense too. Although the orchestra will play on modern instruments, we will use period instruments for the cornetts and chalumeaux which Gluck used both symbolically and to produce special timbral effects.

―In 2012, you conducted a performance of Gluck's Orfeo ed Euridice in the Japanese translation by the novelist Ōgai Mori (1862-1922).

Yes, I remember that performance well. Apparently Ōgai saw a production of Orfeo ed Euridice while he was studying in Germany, and made his own translation of the libretto. I was impressed by how accurately he was able to translate the text into Japanese. It was a meaningful staging.
Talking of Orfeo-themed works, in 2011 I organized a concert titled "Euridice's Lament" with my group Ensemble Genesis at the Kanagawa Arts Theatre in Yokohama, which featured three new compositions by Thanasis Deligiannis, Takashi Niigaki and me. The idea was to tell the Orfeo story from Euridice's point of view, and it was staged together with new works based on the Izanagi and Izanami story in Japanese mythology, and also the biblical story of Sodom and Gomorrah - the three stories share a common theme of "don't look back". As I thought at the time, it's definitely an interesting theme to explore. Anyway, finally I get to conduct Gluck's opera in the original, so I'm looking forward to it very much. 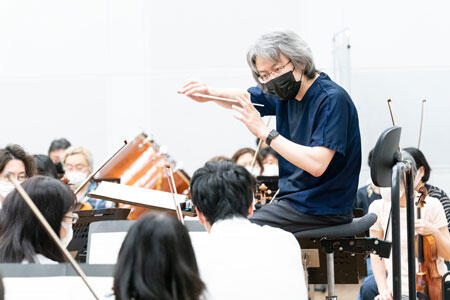 From the rehearsal of Orfeo ed Euridice.
Suzuki rehearsing the Tokyo Philharmonic Orchestra.

―Recently you've been highly acclaimed for your opera conducting. Earlier this year you conducted Ikuma Dan's Yuzuru (directed by Toshiki Okada) in Nagoya and Kumamoto, and in 2020 you performed Handel's Rinaldo with Bach Collegium Japan, which received the Yoshio Sagawa Opera Award. What do you find most exciting about conducting operas?

When I conduct a concert, music is the sole element, but in opera, the conductor is only one of its functions. So I enjoy being a piece of the whole, and I see my role as creating the opera together with the singers. On the other hand, I enjoy being able to influence the dramaturgy and to take the drama forward through the music. Obviously I need to support the singers, but an important role of the conductor is to maintain the appropriate tempo and logic for the drama, which I find very rewarding. I am really looking forward to Mr. Teshigawara's staging, and I want to make sure the music will closely match the tempo of his direction.

―Have you worked with Mr. Teshigawara before?

I've collaborated with him once in an organ and dance project at the Tokyo Metropolitan Theatre back in 2013, and this will be our reunion. Mr. Teshigawara is known as a perfectionist and usually doesn't show his creative process to others, so it is exciting to take part in creating the stage. I'm sure he will be very demanding, including the singers. As a rule, when I conduct an opera, I don't interfere with the director. In fact, I would say that I am quite cooperative to directors because of my own interest in directing. 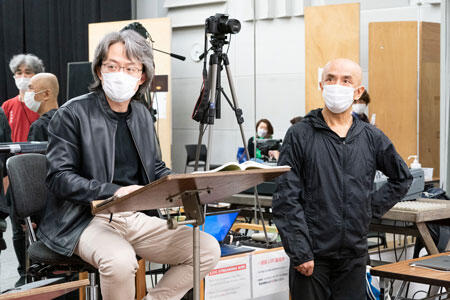 From the rehearsal of Orfeo ed Euridice.
Suzuki and Teshigawara.

―Have you performed with the countertenor Lawrence Zazzo, who is singing the role of Orfeo?

No, this is the first time. Actually, it's the first time to work with all three singers in opera, although I have met the soprano Rie Miyake (Amore). I'm also very excited to work with the exceptional dancer Alexandre Riabko from the Hamburg Ballet.

―Orfeo ed Euridice was premiered in 1762. In the standard opera house repertoire, it stands alone between the great Baroque operas of Handel and others and Mozart's operatic oeuvre. How do you view the work in musical terms?

Well, Gluck was a very popular composer at the time and wrote numerous operas, and I don't think he envisaged that Orfeo in particular was going to have an enduring popularity. In the eighteenth century, music for the theatre was a consumer commodity and new music was being composed all the time - rather like pop music of our times - and Gluck was a very productive composer. He would not have imagined that his generation would come to be viewed as an in-between period in music history. If anything, Gluck should be considered as one of the composers who actively changed the Baroque operatic style.
His era would later become known as the "Pre-Classical Era", and it was a time when the Baroque rhetoric was being transformed. In Orfeo ed Euridice, Gluck removes the secco recitatives (recitatives with only continuo accompaniment), which was a central feature of Baroque opera, and composes so that the text flows continuously - this aspect would ultimately lead to Wagner - thereby producing dramatic tension. I think this is one of Gluck's greatest achievements.

―What are the features of Gluck's music?

Gluck is generally hailed as a reformer of opera, but to me he seems a very meticulous and professional composer. For instance, his vocal writing is very skillful and I see him as a true craftsman.
At the end of the third act of Orfeo, a ballet scene suddenly pops up ― certainly a convention of the operas at the time - but I'm curious what Gluck's intentions were here. He might have composed it to please the audience or because of the popularity of ballet in Vienna. Musically though, it can feel a bit lengthy and superfluous, so I need to make sure I maintain the tension throughout. I think this dance scene is the key to the ending of the opera, so in that sense, it is indeed fitting that Mr. Teshigawara should direct it.

―Which operas would you like to conduct in the future?

On Stage from 19 to 22 May.
See here for more information.