Interview: FUJIKURA Dai on "A Dream of Armageddon" 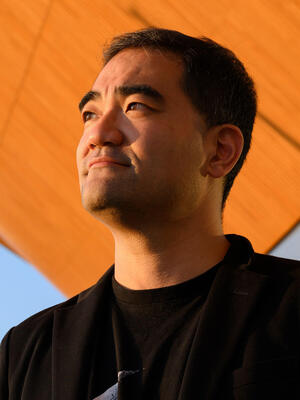 ―A Dream of Armaggedon is your third opera. Why did you choose this subject?

When Kazushi Ono (Artistic Director of Opera) contacted me about a new opera commission for the New National Theatre, Tokyo, he asked me specifically "to find a topic that is relevant to today" - in other words, not a fairy tale. So I read a huge amount of books, new and old, and came across this little-known novella by H. G. Wells. Somehow it attracted me from the very beginning.

Both my previous operas, Solaris and The Gold-Bug, were set on famous works, but this time I wanted to choose something by a famous author but an unknown short story, so that there is room for us to imagine. When creating an opera, as opposed to a movie or play, the singing and playing would expand the original and it will become longer. In that sense, this novella by H. G. Wells was perfect.

―H. G. Wells is often called the "father of Science Fiction", and works such as The Time Machine and The War of the Worlds are well known, but probably only a devoted fan would be familiar with A Dream of Armageddon.

Harry Ross, our librettist, told me that H. G. Wells is one of his favourite novelists and he read a lot as a boy, but even he didn't know A Dream of Armageddon. Although the novella was written in 1901, well before the two world wars, there is a dictator-like character. The work feels eerily prophetic and also relevant to our times.

―True, there is a dictator-like character in the story, but the portrayal seems rather vague.

Yes, everything is vague because it's a dream. Well, you say vague, but actually I like the short story to have this "floating" element. The beauty of opera is that it can have many productions, and the director can set it anywhere. I think this is a timeless, political dream.

―How did you and Harry Ross collaborate in the creation of the opera?

Well, Harry and I go back many years. We first met at music college -- at the time he was a singer, but he wanted to produce and direct. Now he is an event producer by day, but as a poet, he has been my collaborator in my vocal works for twenty years. However, it's the first time to work on an opera project together, except for an opera we created as students, so I'm very happy.

Funnily enough, when we were students, we had an idea to do an opera that starts from a train sequence! Don't you think it's a great opening? We made many proposals and sent it off to various promoters, although we never heard back from them. It was just as well as we never actually figured out what to do after the train scene! This memory came back to me as I was reading A Dream of Armageddon.

Usually when we collaborate on vocal music, I compose the music first and then he sets the text, but with this opera, Harry wrote the libretto first. Then we had many discussions and there were many more drafts. Even when I started composing, I'd often ask him "can I have something like this?" and he would make changes. As Harry was originally a singer, he has sung every line in the opera and checked every word setting. It's different to having a librettist who doesn't sing.

―Some aspects the story have been adapted in the opera. Did you and Harry talk about these changes?

We are not changing anything, but since the short story is quite dream-like, we've fleshed out some of the details such as the characterization. In particular, we wanted to make Bella lead the story because we felt that's more today's standard - and because we both have daughters. In the novella, she is portrayed as a fantasy "dream girl", but in the opera she is actually quite politically charged, and leads the story.

―How did you flesh out the character of the dictator?

I've never composed a role of a dictator before! That is the beautiful thing about composing opera. When you're writing a string quartet, you're not going to write something after a dictator role. You think of something "beautiful". But in opera, the story makes me have to write. Harry and I watched dozens of dictator speech patterns on youtube, and we found that what they have in common is the effective use of pauses. Funnily enough, the libretto was written two years ago when Theresa May was still the Prime Minister in Britain, but Harry gave the forename "Johnson" to Evesham, the dictator character [in Wells original, Evesham doesn't have a forename]. It's a total coincidence, honest!

So many things surprised me while I was composing this opera. I never dealt with politics in my works before, and musically I like everything quite clean and pretty. But Harry's taste is quite opposite. He likes gritty and dirty things, and even his holiday photos are full of local garbage bins! So in this opera, Harry's text pushed me to write music that is totally chaotic.

―How did you meet Lydia Steier, the stage director? 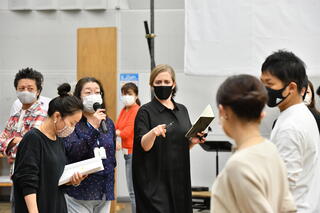 I got to know Lydia through our mutual friend Claire Chase, flutist and member of International Contemporary Ensemble. Lydia and Claire were at Oberlin College together. When we first met in person in Berlin a few years ago, Lydia told me that she had known my music for many years through Claire's concerts. We said at the time how great it would be if we could collaborate together on a project. A few months later, Kazushi commissioned me this opera so I mentioned I wanted to work with Lydia and he agreed immediately. This was just before Lydia made her big break with the production of Die Zauberflöte at the Salzburg Festival. In particular, using the choir is her thing, so I'm interested in how she will direct the chorus scenes in A Dream of Armageddon.

―Did you discuss with Lydia about the stage concept?

No, not at all. As much as I'm a control freak in my music, I think that when I'm collaborating with talented people, the best thing to do is not to interrupt them. Let them do what they do best, because apart from the music part, I'm as amateur as anybody. Lydia is a person who is born to direct.

But the nice thing about opera is that the composer is pretty much the boss. Actually, when I was growing up, I wanted to compose film music - I was fascinated by the big orchestral scores in movies such as Alien 3 and Interview with Vampire. But I was very disappointed when I found out that composers had to write to fit the pictures. I had imagined that the composer got to write the music first and then the director made the film to fit the music! In that sense, one can say that in creating an opera, the composer is in the driving seat.

Actually when I started on my first opera Solaris (2015), I wasn't sure whether it was my thing or not. But when I started writing, I got this feeling which I didn't know I had. I felt this is something I wanted to do, but didn't know I wanted to do. It was so much more fun writing opera than concert music, because fundamentally I like telling a story. In fact, I was telling a story in an abstract way in my concert music too - for example, in my piece My Butterflies for wind orchestra I wrote about the sensations my wife experienced in pregnancy. But in opera, I have an actual story to tell in music - that's perfect.

―In the original novella, the narrative goes in and out of the dream. How have you approached this in your opera?

Harry and I discussed how many times we were going to move between the two worlds and we decided that we'd keep the train sequence to the first few scenes and then concentrate on the world of the dream.

Actually, the opera opens with a cappella chorus, which I think is quite unusual in operatic repertoire. Harry wrote the text for this prelude, which immediately sets the world of the story. I didn't want an opera which slowly gets people into the story. The chorus starts and we are straight in!

―Could you introduce the cast?

The cast is a mix of international singers and Japanese singers. Both Lydia and I made suggestions for the casting. I trust her choice because she is a singer herself. Tenor Peter Tantsits, who sings the role of Cooper, is a specialist in contemporary opera and has appeared in Ligeti's Le Grand Macabre. Lydia suggested Jessica Aszodi for Bella, an Australian soprano who often sings with International Contemporary Ensemble. Seth Carico, in the role of the dictator, is a Berlin-based bass-baritone who excels in character roles. Tetsuya Mochizuki and Etsuko Kanoh are both familiar faces at the New National Theatre, Tokyo. The score has been ready for two years, and we have an excellent line-up of conductor, creative team and singers, so please come and see it!

On Stage from 15 to 23 November.
See here for more information.