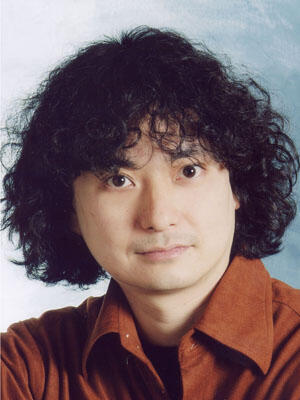 ―Mr. Aguni, you will direct La Cenerentola which will open the new season at the New National Theatre, Tokyo (NNTT). Could you explain your concept for the production?

As the Opera Palace is a very big space, one needs to make sure the production is large enough. The opera La Cenerentola is not based on a historical story, but it's more a fantasy, and I want to bring out Rossini's colorfulness on stage to match the amusing storyline. Also, the NNTT has staged the production by the legendary Jean-Pierre Ponnelle in the past, so I wanted to present something different. I got together with the set and costume designer, Alessandro Ciammarughi, and we decided to set the opera in the Cinecittà studios in Rome in the 1950s-70s, the golden age of Italian cinema.

―I've had a look at Mr. Ciammarughi's designs for his production. It's full of vivid colors, and the film sets look very attractive. Also I can see the costumes pay homage to many classical films.

The opera is set as a play within a play. The story of La Cenerentola as devised by the librettist Jacopo Ferretti and Rossini is played out as written, but we set this within a frame devised by Aguni and Ciammarughi. The opera takes place in the Cinecittà studios in Rome; Don Ramiro is a film producer, his tutor Alidoro a film director, and together they are searching for the girl to play the heroine role of La Cenerentola. 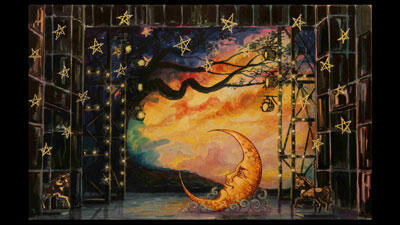 ―The story of Cenerentola (which means "covered in ashes" in Italian) could easily be turned into the Cinderella story of a film star. What is your view of Angelina, who is mockingly called Cenerentola by her stepfather (Don Magnifico) and two stepsisters?

What is interesting about Ferretti's libretto is that he has removed all the magical fairy tale elements that are prominent in Perrault's tale. La Cenerentola is not a story about a girl who finds happiness through the help of magic, but it's a more realistic drama in which she grabs happiness for herself. The opera opens with Angelina singing "Once there was a king", and the stepsisters tell her to stop, but she continues to sing. We know then that this Cenerentola is not easily defeated. She strikes back at her stepsisters. When the Prince's valet Dandini (disguised as the Prince) invites the family to the palace for the ball, she begs her stepfather to take her along, knowing that they are not going to take her.

―But she doesn't give up.

I think it's pretty clear what she wants. She falls in love at first sight, and she is disappointed when Prince Ramiro (disguised as his valet) asks for the baron's daughters, not her. She is very honest and a real character. In Act II, she gives the Prince her bracelet instead of the glass slipper and says "You must search for me, meet me, and if you do not mind, you will have me". Here it's Cenerentola who sets the conditions. Then in her final aria, she forgives her stepfather and stepsisters, and you think she has a kind heart. But actually, I think forgiving is the best way of revenge. Rossini's La Cenerentola is a very human tale - not at all like the Disney version of Cinderella.

― La Cenerentola was premiered in 1817 at Rome's Teatro Valle, the year after the premiere of Il barbiere di Siviglia also in Rome. Both the librettist Ferretti and the designer of this production, Mr. Ciammarughi, are born and bred in Rome. You also grew up in Rome from a young age. Is there a sort of "Romanness" in La Cenerentola ?

Actually, Mr. Cimmarughi is not a typical Roman at all. He's never late and is a very meticulous person - even more than the Japanese! I'm probably more Roman actually. In Rome, when we meet up with friends, we say "let's meet at a reasonable time". This is a typically Roman expression, which is not understood by people who are not from Rome. They will say "what time is a reasonable time?" But between us Romans, we understand each other. Also, Roman people like saying "leave it to me!" They like to act cool.

―As an outsider, people of Rome always seem lively and fun.

I think people in Rome are proud of their Coliseum and the Forum, and also the presence of the Vatican. On the other hand, it also quite provincial, and when you walk into the narrow alleys, it feels like you've wandered into a small village somewhere. Each area of the city has a strong sense of family bonds, and often there is rivalry between them. I would say the character of the sacristan in Puccini's Tosca is typically Roman. Perhaps the fact that Ferretti didn't portray the story as a childlike fairy tale reflects his Romanness. Also, there are some cruel moments in the opera. 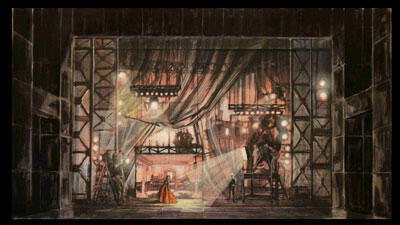 ―What do you mean by cruel?

For instance, Don Magnifico had married Angelina's mother, but when she died, he used up Angelina's inheritance on his own daughters. When Alidoro asks for the third daughter, Don Magnifico answers "she died". And when Cenerentola says "no she did not die", he says "if you say another word, I will cut your throat!"

―Yes, I see. One could say that La Cenerentola has more black humor than Il barbiere di Siviglia , and is more modern.

I agree. But interestingly, Rossini's music doesn't delve into this. He leaves it to the listener to think about it. Often when I'm listening to Rossini's music, I can't tell whether it's buffa or seria. I haven't had the opportunity of directing his opera seria, but for example, when I listen to his Otello , there are moments when I think, wait is that Il barbiere ? But then, that's the power of his music. He doesn't change his style, yet it's definitely the world of Otello that he is depicting. Furthermore, the image of the music changes depending on the cast. This is what I enjoy about Rossini.

―Is Rossini easy to direct?

I want Rossini to be full of color. That doesn't mean the stage should always be lit up in bright colors, but with his kind of music, I feel the setting and the space need to be bubbly and sparkly. If you do the same with Mozart's da Ponte operas and put them in totally different visual settings, it could become confusing because the drama told through the text and subtext is quite deep, and there's a lot to say. With Rossini's operas, I feel he gives more freedom to the players and singers, as well as to us directors in the modern age. He seems to be saying to us, "how will you create this world?"

―Does that mean with you have to create the fantasy yourself?

That's true. Even without the fairy tale magic, the fantasy is expressed in the music. The reason I chose to set it in the cinematic world is because there are so many expressive possibilities. If I wanted to, I could have staged it like a musical. For example, the scene where Cenerentola and the Prince first meet, is like a scene in an amusement park, rather like the world of the film La La Land . I think Rossini knew the "anything-goes world" of baroque opera. In Rossini, there are no expressive limitations on stage: time can stop at any time or start again, or one can go into a totally different world. The most difficult bit is to cast the ideas into shape. It was the same when I directed Il barbiere ; the setting shouldn't be so far removed that people would say what was the original like? Also, the good thing about Rossini is that there is scope for the singers to play around with.

―In this production, Angelina is sung by WAKIZONO Aya. I think she's perfect for the role. Is it the first time for you to work with her?

It's the first time in a professional capacity. When she was a student at Tokyo Geidai, I directed a production of Don Giovanni there and Ms Wakizono sang Donna Elvira. There were several interesting students in that class and she was quite unique too - in a good way, of course. Her Elvira was excellent. Obviously, she's changed since then. I'm very much looking forward to working with her in this production. Luckily she had an opportunity to go to Rome, so she has already had a costume fitting with Mr Ciammarughi. We've talked about the concept and she is very excited.

―How about the other members of the cast? Veteran singer Alessandro Corbelli should be a brilliant Don Magnifico.

I think so. It's the first time to work with him, but hopefully he will be happy with the concept. The singers from Europe are all new to me. I know KAMIE Hayato well - I worked with him in Il barbiere. TAKAHASHI Nobuko (Clorinda) sung Adina in L'elisir d'amore when I made my directorial debut, and we also worked together in Il barbiere at NNTT. It's great to have her in this new production. SAITO Junko (Tisbe) played a gloomy heroine in Eine florentinische Tragödie at NNTT two years ago, but at rehearsals she was very easy going so I'm assuming she likes to have fun too. They have different personalities, so they will be able to bring out the distinct characters of Clorinda and Tisbe.

―It's great to open the season with a new production of a fun Rossini work. What do you hope to achieve?

The team and I are very honored to present the opening production at NNTT, and we feel a strong responsibility. When I got the offer to direct La Cenerentola , it was pre-pandemic, but the past year has been really difficult for so many people involved in the performing arts, and I've had work cancelled too. So, in this production of La Cenerentola , I want to create a happy ending despite all the suffering and hardship, which will lead to a new life. I hope we can make it to the opening of this super show.

On Stage from 1 to 13 October.
See here for more information.