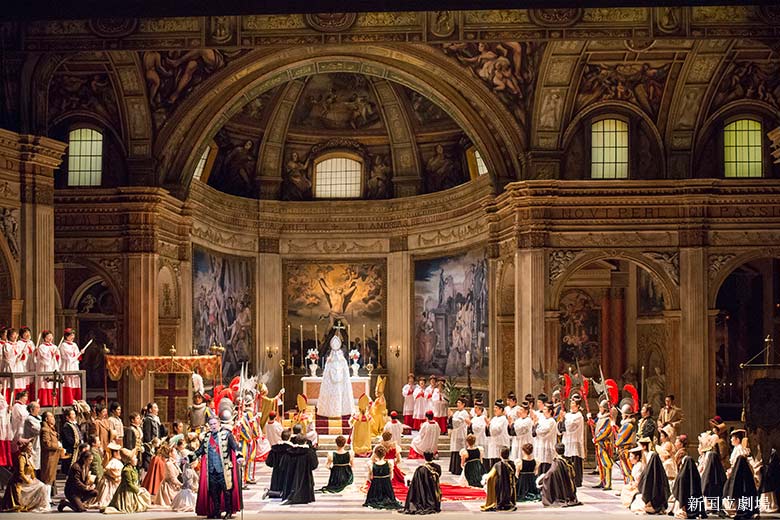 In her house debut, acclaimed soprano Catherine NAGLESTAD sings Tosca, a role she has performed in many of the world's leading opera houses including Wiener Staatsoper, Bayerische Staatsoper, the Royal Opera Covent Garden and Opera de Paris. Spanish tenor Jorge de LEÓN returns to reprise the role of Cavaradossi for which he won highly praise in 2015. The villain Scarpia is played by charismatic Italian baritone Claudio SGURA, who has made this role his specialty. Leading the Tokyo Philharmonic Orchestra is the fast-rising conductor Lorenzo VIOTTI.
In this production of Tosca, the Chorus of the New National Theatre, Tokyo is joined by the Biwako Hall Vocal Ensemble based in Otsu City, Shiga. Furthermore, following the performances in Tokyo, the production will transfer to the Biwako Hall on July 21 (Sat) and July 22 (Sun).

The setting is Rome, June 1800 - a period of power struggle between Republicans and Royalists. Republican Angelotti escapes prison and seeks help from his friend, the painter Cavaradossi who is painting in the church. Soon after, his lover and celebrated singer Tosca arrives. She is jealous of the woman represented in his painting, but they promise to meet later and she leaves. While Cavaradossi takes Angelotti to his villa, the police chief Scarpia arrives at the church in search for the fugitive. He tricks Tosca into leading the police to Cavaradossi and Angelotti.
Cavaradossi is captured and brought in to Scarpia. Tosca is also summoned to his study and when she hears Cavaradossi being tortured in the next room, she reveals Angelotti's hiding place. Tosca pleads for Cavaradossi and Scarpia agrees to release him if she would give herself to him. She reluctantly submits, but as he finishes writing her a safe-conduct pass, she stabs him to death.

At dawn the next morning, as Cavaradossi awaits execution at the Castel Sant'Angelo, Tosca appears and explains the mock execution and tells him how she killed Scarpia. When the squad fires, Cavaradossi falls. Tosca rushes to him but discovers that Scarpia had betrayed her, and before she is arrested for his murder, she leaps from the battlements.