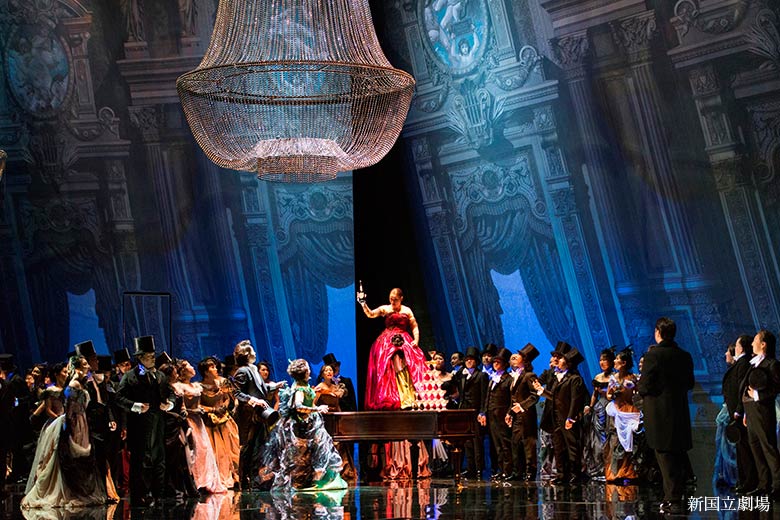 Running time is approx. 2 hours 45 mins including an interval

"La traviata" is set in the world of Parisian high society. This popular opera tells the story of the courtesan, Violetta Valéry: her loves and her sad fate. It is based on the dramatic adaptation of the romantic novel, "La Dame aux Camélias" by Alexandre DUMAS fils, modeled by the author on the high-class mistress, Marie Duplessis. Giuseppe VERDI then took the story, making its heroine a contemporary woman, and writing an innovative opera in which he raised the role of the music itself to that of expressing the story's emotions. Starting with "Libiamo ne' lieti calici" ("Let's drink from the joyful cups"), which has become a well-known, staple tune of gala concerts, the work features numerous other famous songs, such as Violetta's most technically demanding aria, "Ah, fors'è lui-sempre libera" ("Ah, maybe he's the one-Always free"), in the prelude foretelling tragedy, and Germont's "Di Provenza il mar, il suol" ("The sea and soil of Provence").

The director, Vincent BOUSSARD, is a recognized authority of sophisticated staging with an unerring eye for colour. His production of "La traviata" (first staged in 2015) displays that aesthetic sensibility. At the same time, he effectively holds up a mirror on the world to paint an imagined landscape, taking the theme of a woman's fate in the world of men. Upon curtain fall, we are left with the vivid picture of a woman who has lived her life with unwavering pride.

The conductor, Riccardo FRIZZA, is known for having brought his charismatic musicality to Italian opera, in particular. The role of Violetta is played by Irina LUNGU, who has appeared in this role on numerous occasions including her renowned performance at La Scala Milan. This is her first appearance at the New National Theatre Tokyo. Alfredo is played by Antonio POLI, and Germont by Giovanni MEONI.