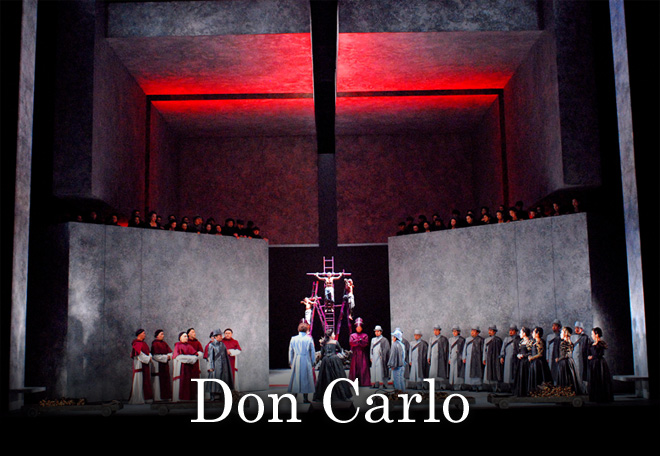 This is a masterwork from VERDI's mature period. At the centre of this massive historic drama is the grief of a prince, whose sweetheart becomes his father's bride. Confrontations in politics, religion and in the relationship between father and son, love and jealousy, friendship, as well as complicated intertwinement, between the characters are all expressed in the stately, dignified music. The staging by Marco Arturo MARELLI comprises a space surrounded by prison-like walls and a symbolic cross. It was first presented in 2006 and is here being re-presented 8 years later.

The title role is played by Sergio ESCOBAR, a lyrical tenor whose star is ascending, and who is being besieged with offers from prestigious conductors and opera houses. Markus WERBA will sing Rodrigo, the core role in this opera. Pietro RIZZO, a familiar face from the successful NNTT productions of Il trovatore in 2011 and Rigoletto in 2013, will be conducting.

Running time: About 3 hours 30 minutes, including one interval.

Z seats are available at the Box Office from 10:00 a.m. on the day of the performance. One ticket is available per person. Telephone bookings are not accepted.